Ten Years to Save Biodiversity on Earth!

The Convention on Biological Diversity (CBD) released a ZERO DRAFT OF THE POST-2020 GLOBAL BIODIVERSITY FRAMEWORK on the 13th of January 2020, which sets global goals to combat the ongoing biodiversity crisis in the coming decades.

“Biodiversity, and the benefits it provides, is fundamental to human well-being and a healthy planet,” the draft plan reads. “Despite ongoing efforts, biodiversity is deteriorating worldwide and this decline is projected to continue or worsen under business-as-usual scenarios.”

According to the CBD, almost one third of the planet has to be protected, while pollution has to be reduced to half of current levels to save our remaining wildlife, and all of this by the year 2030! The draft plan also outlines 20 targets for the next decade for achieving these targets.

The Biodiversity Convention aims to stabilize biodiversity by the year 2030 and effect recovery of fragile ecosystems to by 2050, aligned to its vision of ‘living in harmony with nature.’ Similar targets were set up for 2020 after the COP10 at Nagoya in 2010, but these have failed spectacularly. The unprecedented extinction rates is a pointer to the dawn of the sixth mass extinction era, and it will have severe consequences for human survival.

While protected areas around the planet are being systematically targeted for extractive industries, the Biodiversity Convention draft plan targets protected status to biodiversity rich sites covering at least 30% of the land and sea areas by 2030, with at least 10% under “strict protection.”

The CBD also envisages the reduction in pollution by at least 50% from current levels,  including pollution from biocides and plastic wastes. The provision of better food security and clean water for improving the quality of life for reducing human-wildlife conflict are also among the targets mentioned in the draft plan.

The CBD has warned that the population growth- which is expected to reach 8.6 billion by 2030 and 9.8 billion by 2050 — will have severe “implications for the demand for resources, including food, infrastructure and land use.”

Other 2030 targets include ensuring that the trade of all wild species is legal and sustainable, bringing greater sustainability to economic sectors and individual consumption, and empowering indigenous communities in the conservation effort. The draft plan is expected to be finalized and adopted in October at a biodiversity summit in Kunming, China.

The extinction rate of species is exponentially higher than it has been on average over the past 10 million years with a million species are currently on the verge of extinction. The threats are linked to human activities, with shrinking habitats, exploitation of natural resources, climate change and pollution being the main drivers of extinction. 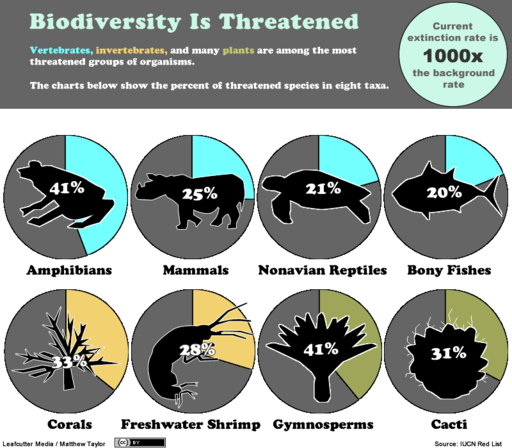 Spotlight on Nature & Biodiversity at COP15

Deadlock on Loss and Damage Finance